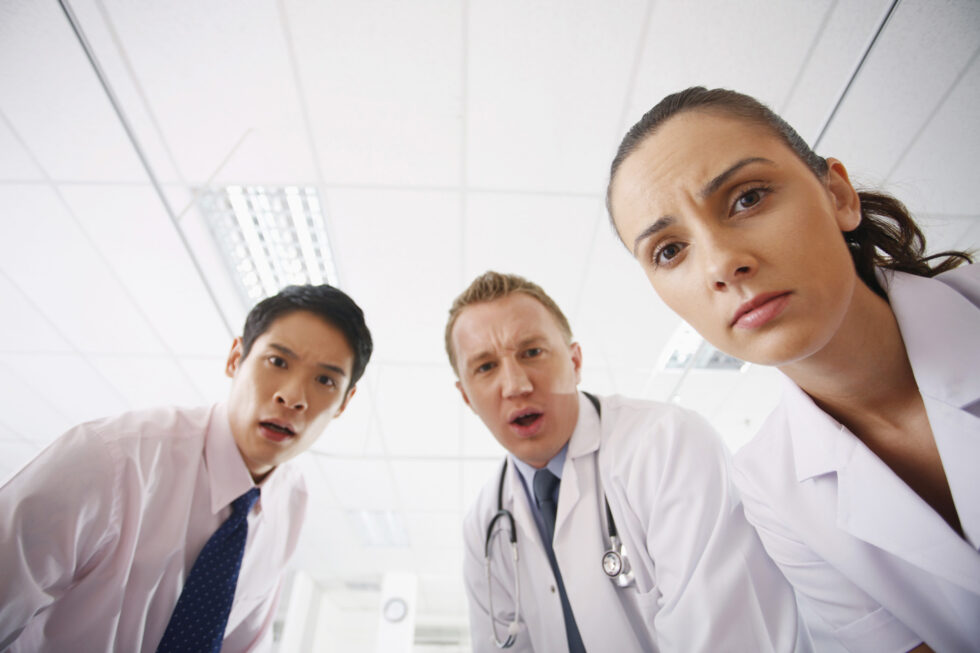 He Always Has The Last Word

Some people put a little too much stock in experts. I was thinking about this the other day when I looked at my daughter’s nearly-perfect, bottom row of teeth.

When she was five years old, I took her to the very same children’s dentist that I had gone to as a child. When he saw that two of her baby teeth had grown in fused together he told me he would have to pull them to avoid future dental problems. He also wanted to pull the two identical teeth on the opposite side of her mouth because, “blah blah blah, blah blah.” If I remember correctly those were his exact words.

Since she had already lost the two teeth in the middle this seemed a bit extreme. But he was an educated man who had been practicing dentistry for many, many years. I assumed he must be right.

Yet once they were pulled, he assured me he had done all he could and that we should start saving now because based on the x-rays this poor little girl had “one messed up mouth” and she would definitely require braces in the future. He literally gave me the card of an Orthodontist as I left his office that day. Today, fifteen years later, her baby teeth have all been replaced by her adult teeth. She has never worn braces. Bottomline? Her pearly whites are as straight as can be. .

Did we pray about her teeth? Yes, of course we did. Did this change the outcome? I won’t know this side of heaven what might have transpired had we not prayed. I only know what I see now, that the outcome the expert predicted was wrong.

I remember another time, after my oldest was born, I took him in for his two week check-up. The doctor did all of the usual checks but because it was over 25 years ago, I couldn’t tell you now exactly what it was she did. I do remember her weighing him, measuring his length, and feeling the inside of his mouth with her finger. She said she was concerned because he had a very high palette and it was something that could cause him to have speech problems in the future. As a brand new mom and first-time parent, I was extremely worried and made sure that my husband was equally worried as I cried to him when he got home that evening.

We were not Christian’s at the time, so I never considered prayer.

Did my son experience any speech problems? Far from it. Niko was speaking in complete sentences at the age of eighteen months, often mistaken for a much older child because of his incredible speaking ability. And being tall for his age didn’t hurt either.

Another time, when the same son was three years old we noticed that our perfect little boy had developed what we thought was a bad habit. At first we never actually saw it happening, we only saw the effects of the habit. The small bald spot on the top of his head seemed to be bigger each time we saw it. By the time it reached approximately four inches in diameter we were beside ourselves with worry. How could we get him to stop this habit if we never actually saw him do it? We were not even positive he was actually pulling his hair out, although it seemed to be the only answer to the very noticeable bald spot on the back of his little head. Wearing baseball caps didn’t help; talking to him about it made no difference either.

We decided our only option was to take him to the barber and have his head shaved. If he could not grab it, he wouldn’t be able to pull it out and by the time it grew back in, we hoped that the habit would be broken.

The barber recognized the bald spot and hair pulling as symptoms of a disease that someone had just informed him of. The woman had left her phone number and asked that he give it to anyone who might be experiencing the problems associated with compulsive hair pulling. I called the woman as soon as I got home. She was very sweet and more than happy to talk with me. When she visited, she brought pictures of some of the cases with which she was personally familiar and pamphlets with detailed information. She told me that she herself had been diagnosed with compulsive hair pulling or Trichotillomania. She explained that without proper treatment, the pulling would lead to permanent baldness. She, actually, no longer had eyebrows.

As you can imagine all of this information was very upsetting. We wanted to talk with someone who was a trained professional in the field before we just accepted what this woman said to us about our son. We made an appointment with a Psychiatrist in San Diego, who was well known and respected. At $220 an hour, we felt she would be our best bet for accurate information regarding this disease and whether or not our son had it.

Within an hour and a half of entering her office, she was prescribing two different types of medication that my little three year old son would have to take for the rest of his life. She promised me that if I neglected to fill the prescriptions, even though he might have temporary bouts of non-pulling, the stress of kindergarten, elementary school, high school, and college would bring on the involuntary compulsive pulling. Eventually this would be enough to do permanent damage to his hair follicles. She said, that by the time he was in his twenties he would most likely be completely bald, without eyebrows or even pubic hair.

I took the prescriptions and went home to talk to my husband. I admit that this doctor had scared me and I was ready, for the sake of my child, to pick up the prescription and start administering the medicine that night. My husband put his foot down; no way would he put a three year old on mind-altering medicine for the rest of his life. He called his Christian parents and they said they would pray. I talked with my parents and we came up with a plan. Each time Niko would become agitated we would give him a stack of newspapers to tear up. At first he thought it was fun. We went through this, day after day, week after week, until finally he hated the paper tearing more than anything else. He promised he would never pull his hair again if he didn’t have to tear up newspapers anymore. We gave him the benefit of the doubt and watched him like a hawk. His hair had grown in by this time and didn’t seem to be disappearing anymore.

Over the years, I’ve kept this information in mind and watched as things in school or at home became stressful. I made sure to notice that his hair was always intact. He is now a college-educated, husband and father. He has never gone through another hair pulling incident since.

Again, I am not saying the diagnosis was wrong, I will probably never know. All I do know is the predicted outcome, the prognosis, was wrong.

We would all do well to consider what each of these individuals, experts in their fields, failed to take into account. And that is, no matter what things look like, ultimately God always has the last word!